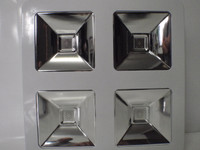 LED lighting and its use in the hydroponic grow room as come along way since its introduction and inception. LED’s get their name from their light source – light emitting diodes, they can be tuned by the driver unit operating them, to produce specific ranges of light within the spectrum, as well as UVA and UVB light. There are two common styles of LED lights that are utilized for horticulture, the first style is called a single diode unit. The single diode style LED lights generally have an array of diodes with different bandwidths within the array consisting of white, Red, far red, blues and purple and many even contain UV emitting diodes. With this combination of diodes, it allows the manufacturer to customize the units spectral output and to try to achieve the most efficient and best performing lighting for horticulture and Hydroponics.

The second style of LED units are the COB style. COB stands for Chip on Board. The units are a combined style array that have all the diodes in one place and generally come in a 32 or 64 array. These COB units can come as single 50w/100w unit up to a 16 COB unit which can operate up to 1600w of power.

The advantages of the LED grow lights is that they run a lot cooler than HID style lighting. The single diode uses a heat sink to dissipate the heat generated passively, where as the COB units feature a small fan which is mounted to the back of each COB assembly to remove the heat generated. The heat is pushed away from the unit and is then exchanged by your extraction system.

The second benefit of LED lightning is the reduced power consumption by the unit compared to traditional HID lighting such as HPS and MH.  The par per watt ratio of the top end LED units are as high as 2.5Umol per watt compared to the value of 1.8Umol per watt, which is found in the top end HPS style lamps, making them a great choice for customers looking to save on their power consumption.

If you’re in the market for a LED grow light, Hydroworld stock both styles of LEDS – COBs and Diodes. We stock only the highest quality brands that have been tested for their performance and reliability and have different unit depending on whether your looking for a stand alone lighting option or as supplementary lighting to boost or vary the spectrum of your current hydroponic lighting system.